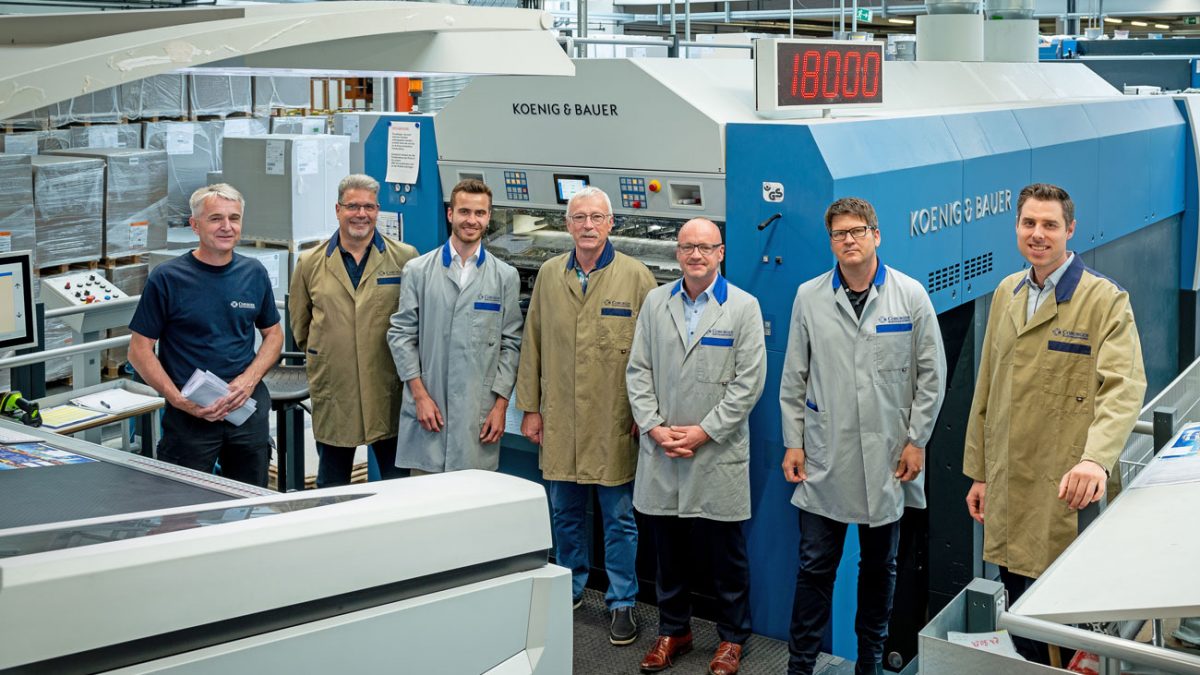 The coat-of-arms of the Saxon electoral princes is ever-present in Coburg and surroundings. It was in 1353 that Margrave Friedrich III of Meissen inherited the lands which made up the territory known as ‘Pflege Coburg’. The town has only been part of the Free State of Bavaria since 1920. Even so, the fact that a sheetfed offset press built just a few kilometres from Meissen has been in production at Coburger Kartonagenfabrik in Dörfles-Esbach since last year has nothing to do with past traditions.

After a series of process analyses and print tests, the converter (that specialises in litho-laminated corrugated packaging) opted for a six-colour Rapida 145 with inline coating facilities and a three-section extended delivery. What was already an impressive installation was raised by a further 630mm to maximise the efficiency of packaging production, and effortlessly handles piles of 1.8m and more in non-stop operation. Thanks to fully automatic pile logistics, uninterrupted production is even possible when printing on heavy board. 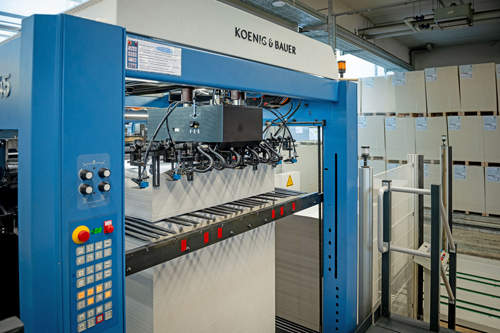 Senior commercial manager, Robert Hein and print manager, Rolf Uting, are full of praise for their operators and the speed at which they have become familiar with operation of the new press. This was not just a change of press model, but also a quantum leap in terms of automation and performance. The sheet output per working hour continues to increase from month to month. Regular performance reports, which include anonymous comparisons with other similar sheetfed offset presses, show that the Rapida 145 at Coburger Kartonagenfabrik is already performing at the top of its league. 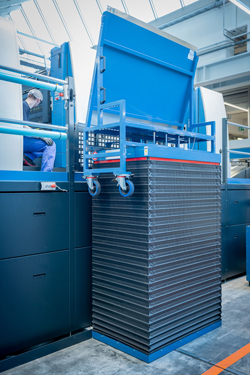 This is not least due to the extensive automation solutions and individual press customisations: From its sidelay-free infeed DriveTronic SIS, to the disengagement of individual inking units and automated and therefore exceptionally fast coating plate changes, the Rapida 145 offers benefits that every press operator highly appreciates. Supplementing these features are the EasyClean ink duct coatings to accelerate ink changes, QualiTronic ColorControl for inline inking control, which also extends to the rear edge of the sheet, and ErgoTronic PlateStretch (remote stretching of the printing plates from the console to compensate paper stretch). Using Koenig & Bauer’s plate trolley lift for inspiration, the specialists at Coburger Kartonagenfabrik designed an additional lift to bring the inks to the press. A chute is also provided to enable used washing cloths to be dropped into floor-level waste containers. All these additional functions reduce walking distances and cut the risk of accidents by minimising the need to climb up and down onto the gallery with full hands.

The new Rapida 145 is responsible for 60 to 70% of the daily production volume. To play out its strengths to the full, it primarily prints on board between 230 and 250gsm. A first step saw the high volumes output by the Rapida 145 save one entire production shift on the older press, which is still installed nearby.

The Rapida 145 makes successful use of unbent, process-free printing plates. To extend the stability of the plates and to maintain process reliability despite the greater contamination caused by the dampening solution, the intervals at which filters are replaced have been made more frequent. Intensive roller cleaning is also scheduled on a weekly basis.

This is just one of the company’s measures to make its packaging production sustainable. It is supplemented by a consistent energy management strategy that involves short and long-term energy savings, continuous investment in energy-saving machinery and infrastructure, and systems for heat and condensate recovery. At the same time, the company has obtained all the applicable certifications for food and non-food packaging production, from ISO 9001 and FSC to HACCP and energy management.

Significant conversion measures had to be carried out on the existing hall to enable installation of the Rapida 145 in its current location, directly at the entrance to the printshop, ensuring it is fully integrated into an end-to-end logistics chain. There used to be a load-bearing column where the feeder now stands. This had to be removed and replaced with a support system to the side of the press, along with a steel roof girder above it.

The installation of the heat exchanger on the hall roof was another spectacular step within the project. The huge dimensions of the hall required a 220-tonne crane with a jib length extending to more than 80m to position the unit on the roof.

First mover in many fields

Coburger Kartonagenfabrik produces several million boxes every day. Alongside the two offset presses, the production floor space of some 40,000 sqm is occupied by litho-laminating machines for single and doublewall corrugated board, die-cutting machines, more than ten folder-gluers, a window patcher and other items of special equipment. The 300 employees handle approximately 45,000 tonnes of paper and board each year. Corrugated products dominate, and account for 80% of the final output. The board types used are F, E and B-flute, including doublewall variants, and they are used in every conceivable combination. 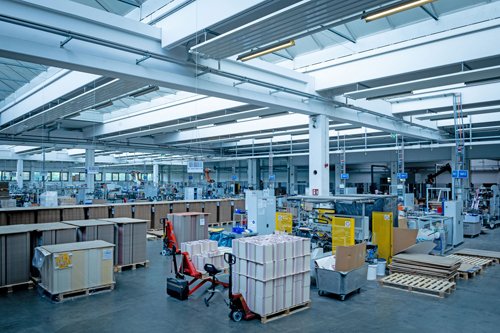 The company branched into offset printing for doublewall corrugated packaging at an early stage. To this end, it invested in the first of the latest generation of inline laminators. Between 2015 and 2021, the company proceeded with a major investment programme covering not only the building structure and machinery base, but also the entire IT environment. The new Rapida 145 is an integral component of this programme, which, for the most part, is now approaching completion. All the measures that have been realised are clearly aligned with changing market conditions and more exacting customer expectations.

The customers of Coburger Kartonagenfabrik are primarily larger SMEs and major industry players from the German-speaking region and the Benelux countries, and represent a traditionally broad and diversified cross-section of the print market.