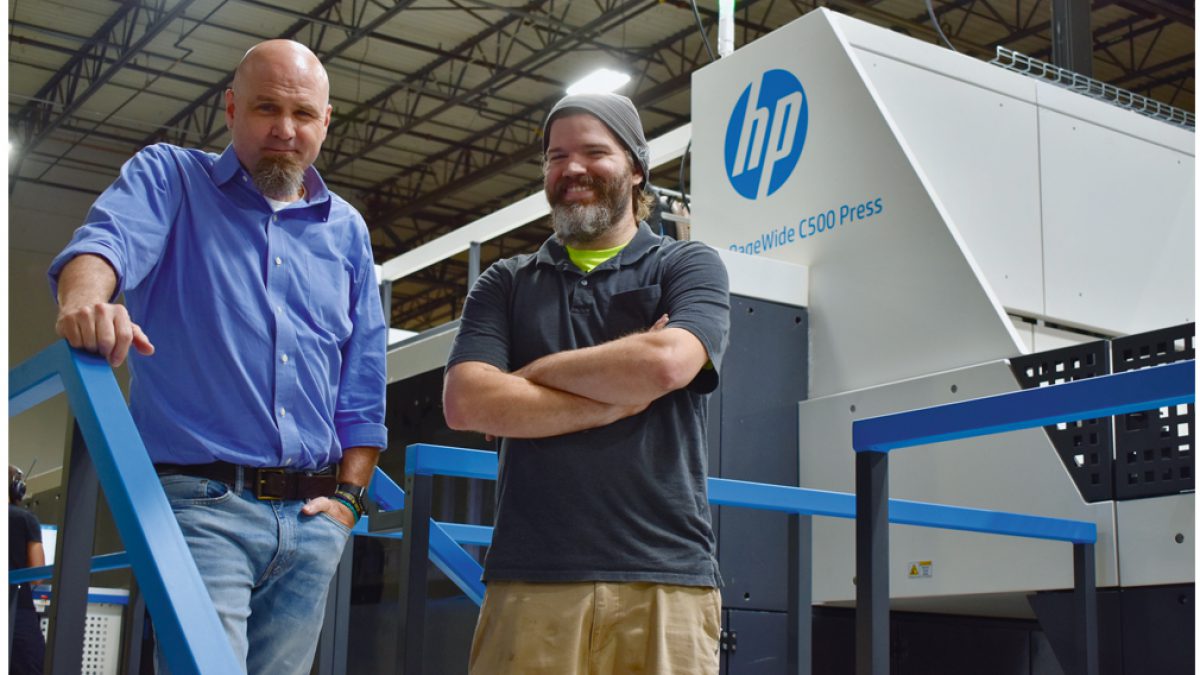 “Pioneers in Printing” was the headline of a feature article about Chief Container that ran in Corrugated Today more than 12 years ago. At that time the company was flexo printing 120 line screen, running grayscale and achieving near perfection in four-color process on its seven and eight-color Bobst Martin DRO presses.

Printing is in the company’s DNA, Reuben Guthrie, President, says. Indeed, in the corrugated industry the name “Chief” is synonymous with high-end graphics and award winning packaging and displays. The independent manufacturer in Acworth, Georgia, has invested millions of dollars and hundreds of thousands of man-hours to perfect the process and in turn earn the reputation as one of the best corrugated printers in the U.S.

While direct print flexo has often received top billing, the printing process never had exclusivity. For nearly two decades, Chief has been blazing new trails in digital printing as well. The first machines were an HP Latex LX600 printer to produce banners, wall posters and signage and an HP Scitex FB700 industrial printer for rigid substrates.

As the product mix expanded, it became clear that analog and digital were two separate businesses so in 2011 Chief Digital was established. “We already knew there was a different mindset required,” Aaron Hayes, General Manager of Chief Digital, says. “Your numbers aren’t the same. There are differences in quality and lead times and how you communicate with the customer. It made sense to split up the companies and run them as separate profit centers.”

In August, Chief Digital became the first company in the U.S. to install the HP PageWide C500 press for single pass, direct to board mainstream production. The press can run F- to BC-flute, coated and uncoated. HP defines the quality as “premium offset for packaging and displays with high-impact graphics.”

Two of the most compelling features are its use of water-based ink and its speed. The CV150 inks and HP Bonding Agent enable printing on both primary and secondary food packaging without an additional barrier, which can comply with even the most stringent global food safety regulations, including Nestle guidance and Swiss Ordinance. “We’re intrigued by the water-based ink. That’s going to have more applications and it fits our customer base,” Hayes says. “It’s the cleanest print and the cleanest quality. You’re not going to have issues with the food and toy guys.”

The thermal inkjet technology deploys one million nozzles and 6X redundancy for consistent quality from board to board. HP reports that this feature reduces or eliminates the risks of nozzle-out white lines that may result from piezo inkjet print heads.

The press prints 246 linear ft/min (4000 sheets an hour) while using HP’s patented Virtual Belt technology for accurate and efficient media handling. “That’s a constant speed. It doesn’t change regardless of quality settings or if you’re running mottled or Kemi,” Hayes says. “That’s 35-36 full sheets per minute, about 4000 sheets per hour. In theory that’s about 60,000 square feet an hour on digital.

“My best days on digital between the 15500 and the 7600 are about 60,000 square feet, running two shifts. To potentially run that in about an hour on the C5 is amazing,” he continues. “I did the math. We could clean the plant out, doing a week’s worth of production in a couple of days because of the setup time.”

The C500 adds significant firepower to the corrugated product mix. “I’m very pleased. The struggle I have is always going to be scale,” Hayes says referring to the 51.9-inch sheet size, which is smaller than most flexo presses. Even so, he says he can run 65-70% of existing flexo and litho jobs on the new machine. “Most large format litho definitely fits on the C5.”

The plan is to move some existing flexo business to the C500. Interestingly, digital is helping to expand flexo work by opening up capacity on the analog machines. “I’m expecting to print a lot more flexo now that I have the C500. I’m not looking to cannibalize myself. You’ve got to be a little bit disruptive, innovative and filling the other pieces. We’re looking to grow every one of these machines,” he says.

This also holds true for top sheet litho work. Chief has two Automatän litho laminators. The newest machine was installed two years ago. Hayes points out that digital printing has not displaced offset printed top sheets; on the contrary, digital has helped it grow.

One of the early challenges was convincing customers that digital printing was a suitable alternative to flexo and offset. “We were already printing 100, 120 line screen flexo. We always had high quality litho. When I brought digital into a customer meeting, it was never a ‘Wow,’” Hayes says.

As a result, the sales strategy shifted to digital printing’s lead times and Chief’s complete toolkit of printing options. “We brought in flexo, litho and digital and laid it on the table and didn’t tell anybody what it was. Instead, we said, ‘Isn’t this beautiful? We have many solutions. We will take care of whatever your problem is.’ That’s where we changed our customers’ mindset,” he says. “We weren’t pushing digital for digital’s sake. It was just print.

“Printing has always been paramount. That’s what we started to sell again. And that has been very successful for us,” he continues. “Now we tell customers, ‘Here’s the program. We’ll let you know how we’re going to run it.’ So life got a lot easier.”

Hayes relates several examples of customers who redesigned their packaging or displays to take advantage of digital printing, whether it was more frequent graphics changes, a seasonal launch or personalized products. One customer in particular wanted new graphics every year for his flexo printed packaging, but Hayes talked him out of it because of the tooling costs. With the C500 the customer can now afford to make those changes. “The benefit for the customer is if he changes the graphics to coincide with a particular retailer’s promotion, the product gets prime positioning on the shelf,” Hayes says. “For a guy whose product has been sitting bottom rack, middle aisle since 2014 now he has a chance to have front placement once a quarter.”

Chief Digital has grown 25-30% annually for the past few years. Hayes says the advances in technology and changes at retail have supported this growth. He is already thinking about ways to marry digital print with mobile phone technology and augmented reality. “When I sit across from my customers and we have specific conversations about digital, I’m usually not hanging around digital that much because it’s just print,” he says. “It looks really good and we’re very effective at it, but how else can digital engage the consumer because every person is holding one of these [mobile phones] and they’re walking through the store.”

HP Scitex digital presses are built in Israel. Hayes has been there several times and he applauds the company’s perseverance in wanting to develop machines for corrugated. “I know of few companies that come inside your door, 25 people and notepads, and say, ‘Tell us what you need.’ And those guys have done that continually. They are always asking me, “Where is the pain?’ The same thing I always ask my customers.”

He is equally is impressed with the machinery support. The press operators use Google glasses to communicate with the staff in Israel to address any issues in real time. “They’ve got an area set up like an air traffic control center in Israel and they’re monitoring the machine and if they see issues happening they will call us. From a predictive maintenance standpoint, it’s pretty phenomenal,” he says.

“You’ve got all the support in the world just like a conventional press, spare parts in the U.S., satellite offices with technicians and that’s all we’ve every had in our industry,” Guthrie says. “But on top of that you’ve got 24/7 troubleshooting and access and when you put these glasses on and look at the machine, they’re looking at what you’re looking at and you can have a conversation about the press. They are banking on us having a successful start and they are doing everything in their power to make sure we do.”

The C500 is massive, not quite as large as a corrugator, but at least three times the size of a conventional press. It is sleek, high-tech and for those less familiar with digital, intimidating. Justifying an investment in any type of digital printing has been the elephant in the room for many board converters who want to know, ‘How do you make money?’ Guthrie is quick to respond. “Other machinery, like an eight-color press, is expensive as well. It’s a legitimate question because the technology changes so fast and it’s out of our comfort zone because we buy this today and it changes in three years. We know we can make it do what it needs to do in that time and still be looking forward to other things.”

Guthrie’s father, Lamar, a corrugated industry veteran, founded Chief Container in 1994. The company has been in Acworth since 2003. Chief Container and Chief Digital operate from a 265,000-sq-ft facility. The 47-acre plot also has a 212,000-sq-ft Specialty Packaging Center and an 80,000-sq-ft warehouse.

There have been a lot of changes in the past few months with the installation of the C500, along with the purchase of several new converting and finishing machines. Also, the company is building a new warehouse.

Hayes and Guthrie emphasize that the management team has done its homework in finding the right mix of technology to meet customer needs, especially with digital printing. “We’ve been doing something in digital all along. I think we’ve seen every digital machine out there and we’ll continue to look at them. While there is this machine (the C500) today, we’ll need something else tomorrow,” Guthrie says.

“That’s the biggest challenge for anybody is matching the customer base,” Hayes adds. “This machine fit us really well. It’s very approachable too.” He says Chief’s strong foundation in digital technology is a significant advantage. “Everybody is jumping in the digital pool. That’s cool. We love a lot of competition. It just makes us better. But people who are jumping in without that foundation or knowledge, that’s where they’re going to struggle.”

“We’re probably more comfortable just because we stair stepped through all the other equipment,” Guthrie adds. “I would be absolutely terrified to go from zero to that (C500). They will figure it out very quickly but it will be painful.”