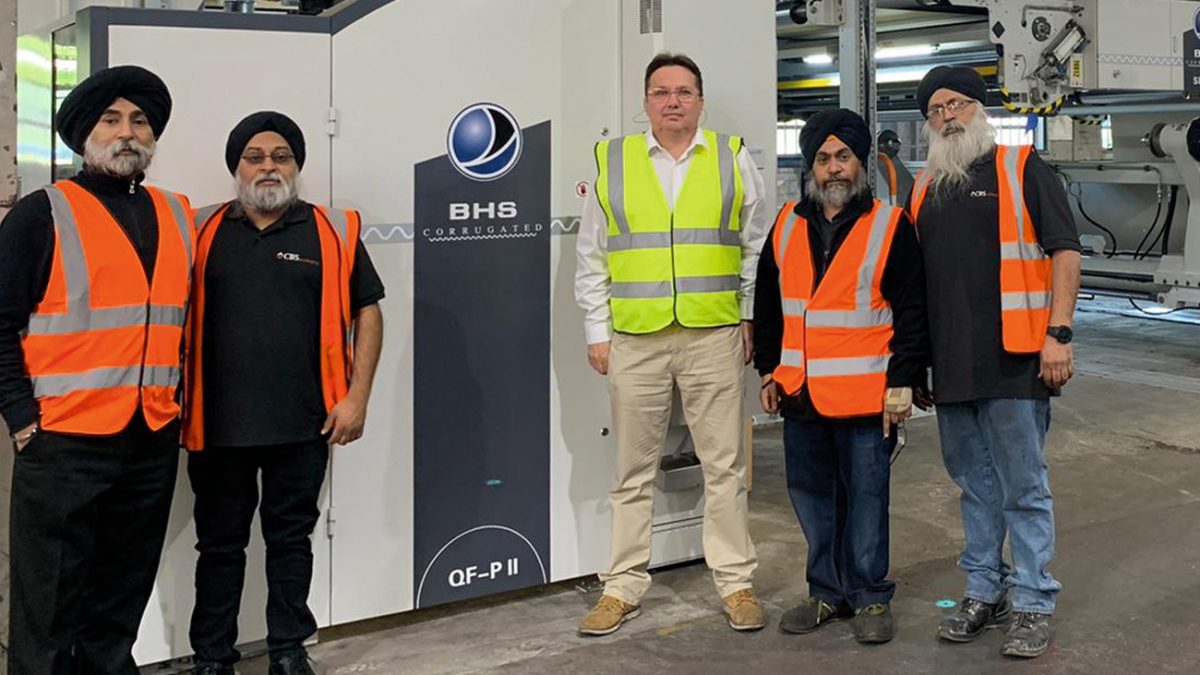 Based in the UK, CBS Packaging was established in 1996 by Jitha Singh and his brothers with the company first registered as Corrugated Box Supplies Ltd. During the early years, the company operated from premises in Digbeth, Birmingham and started out with just two people using basic sheet plant converting equipment. In 1999, CBS relocated to a 33,000 sq. ft site in Smethwick. Further growth resulted in the installation of more machinery, including a die-cutter, two colour casemaker and a gluer.

Over the next few years, business continued to grow and in 2003 CBS took the opportunity to control its raw material supply by installing a 1.6m corrugator and relocating to a 2.5-acre site with 60,000 sq ft of premises. A multi-million Pound investment programme continued, with the purchase of Swallow Box in 2005. This acquisition further enhanced the infrastructure of the company allowing for a distribution network to service the south of England. Five years later, CBS Packaging took on the challenge of moving the business forward with the purchase of Manchester based paper merchant, CPS Paper Products. With slitting and rewinding capabilities, CPS Paper Products provide a continuous supply of paper ensuring the constant flow of production. 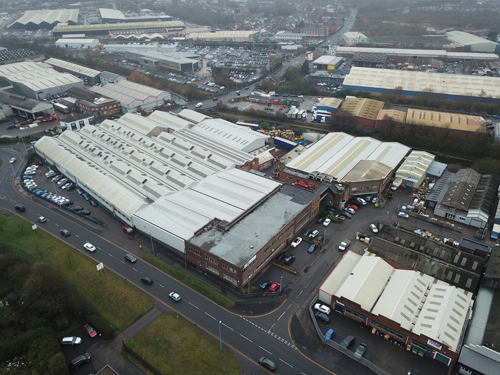 In 2019, Connect Packaging re-branded as CBS Packaging and several months later, they acquired Charapak Packaging. This was a strategic move that allowed CBS to further increase the geographic diversity and strength of its customer base.

“We had done a pretty good job over the years of growing our business through a good sales team and a decent range of converting equipment,” recounts Jitha Singh. “However, we knew that to really spur our growth, we needed to invest in a corrugator to control our supply of board. We took our first step in 2003 when we installed a used 1.6m corrugator. As volumes grew, we then made the move in 2011 and installed a second-hand line from BHS Corrugated. This is really when the relationship with the team at BHS Corrugated Ltd in the UK began. They made sure that we were getting the most out of the 2.2m machine and over the next five or six years, we made improvements to the machine that saw it performing very well indeed.”

The addition of a new Group Operations Manager saw David Pretty joining the company from a leading multi-national integrated group.  “I was approached by Jitha and his team, with the very specific task of helping the CBS Group grow through excellence of operations,” explains Pretty. “I have been running BHS Corrugated equipment for many years, so when I joined CBS and saw the old 2.2m in operation, I was pleased to see them achieving so much from it. However, the time eventually came when it was nearing the end of its effective life.”

That was 2017 – it left the owners of CBS with a practical dilemma. “We realised that the time was right to take a big step forward,” adds Jitha Singh. “Together with David and my brothers Harvey and Jan, we began our research – we looked at all sorts of machines, from Asia and Europe. However, we quickly came to the decision that we wanted to work with BHS Corrugated again – we wanted not only a good machine, but also we wanted excellent training and support in terms of service and spare parts. In our view, BHS Corrugated, through their wholly-owned Bristol office, are the only OEM who can offer the kind of support that we needed.”

The 2.5m Value Line supplied to CBS is a heavy duty, high performance corrugator with a design speed of up to 300m per min, featuring a duplex wet-end from BHS Corrugated Shanghai and a duplex dry-end from BHS Corrugated Weiherhammer. It is a highly flexible machine and is able to process a wide range of papers from the lightest recycled to heavy kraft papers and all flute profiles.

Based on a design philosophy of operator and maintenance friendly construction, the machine has simple straight forward user interface screens showing machine settings, order list information, planned maintenance and trouble-shooting diagnostic assistance features as standard and quality memory per board grade. At the dry-end, there is a Corrugator Control Centre (CCC) where the corrugator supervisor is able to see and run all machines during production via two monitors and all orders for the corrugator are automatically downloaded from the host planning system. A splice synchronisation system ensures minimum waste during grade changes and Production Data Management (PDM) gives analysis and archives production details.

The machine is also supported by the BHS Corrugated iCorr OS system, which connects the CBS corrugator to BHS Corrugated via secure and permanent VPN connection to help optimise productivity and reduce downtime to a minimum. This assists
them with activities such as detecting potential faults together with alerts, troubleshooting problems, providing temporary solutions in the event of system failures and regular back-up of computers.

The wet-end of the corrugator features two QFP single facer groups with a cassette magazine and standard high performance SP-X 350II splicers. Corrugating rolls include C, B, D and E flute cassettes for single and all double wall combinations with a standard cassette change time of 10 minutes.  Each single facer has fully automated settings for glue gaps, corrugating roll regulation plus ‘Soft Touch’ glue application and glue curve gap control to assist with keeping operator input to an absolute minimum across the speed range. The preheaters also include ‘Zero Wrap’ capability for the processing of light weight papers and booster plates for heavy grades. 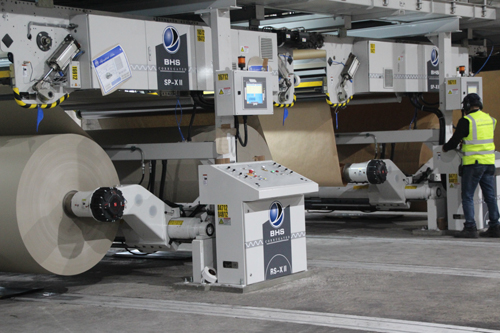 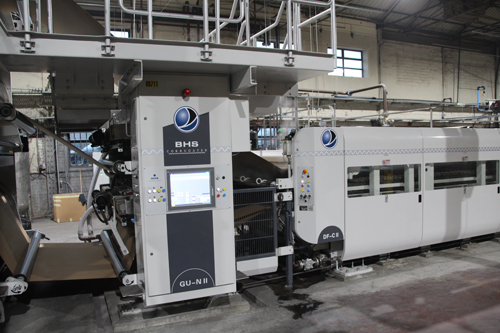 At the dry-end, the machine includes an eight-out SR-V slitter scorer with double profiles and two step off-set for maximum flexibility of scoring options and high speed order change. An HQ-M2 cut-off knife with steel knife bars and 45kW drives, including variable infeed and outfeed load adjustment according to board grade and width of jobs and torque control during cut to monitor knife performance ensures optimum performance at high speed with consistent accuracy. The AS-M 300 stacker with up stacker and down stacker configuration delivers optimum stack quality and high-speed curves when producing short chop and double wall orders. 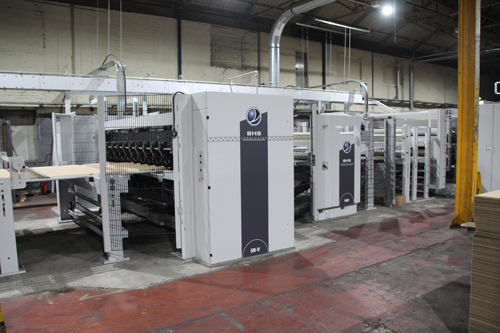 “This line of corrugators has been developed very much with the operator in mind,” explains Phil Pinnington, Managing Director, BHS Corrugated Ltd. “It is easy to maintain and the straightforward design and operation make it an ideal corrugator for growing businesses. Although this is the first of its type in Western Europe, it is a machine which has demonstrated elsewhere that it will add value to any business in terms of driving growth through high levels of quality and productivity, with minimal waste.” 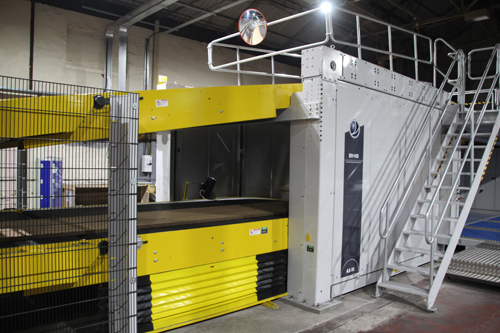 The installation of the machine took place in late July 2019, with the machine being commissioned in September. A mere six weeks later and the first stack was saleable board. The company worked hard to ensure foundations were all in place and an extension to the corrugator bay was added to accommodate the slightly longer machine.

“We really hit the ground running with the new corrugator,” says Pretty. “The operators have all got on really well and this is in part due to the fact it is a more simple machine to run. Within the first day, we were producing sheets for conversion and that was really pleasing to Jitha and the Board of Directors. But looking at the production data now, after six months, we have seen a significant reduction in board waste compared to our old machine and more importantly, we have seen increased throughput in the converting department as they are running jobs faster and with less make-ready waste.”

“We have been running a £10m investment programme for the last few years,” adds Jitha Singh. “We installed a Bobst Vision die-cutter and Eterna flatbed die-cutter with pre-feeder and breaker in 2019, as well as a six colour JC rotary die-cutter. The addition of this six colour inside/out machine means we can run four colours and two colours simultaneously, which is particularly good for e-commerce boxes.”

With a customer base spreading throughout the Midlands and southern England, the company is converting in excess of 50 million sqm of board per year. “The team are still only working on a single shift and the new corrugator is working efficiently,” concludes Jitha Singh. “We will slowly ramp up output and we can potentially achieve 120 million sqm off the new line by adding more shifts. Once we start to see this growth, we will then add more converting lines. We have an exciting future ahead and the investment in our business gives a nice platform for the next generation of our family to continue growing our position in the market.