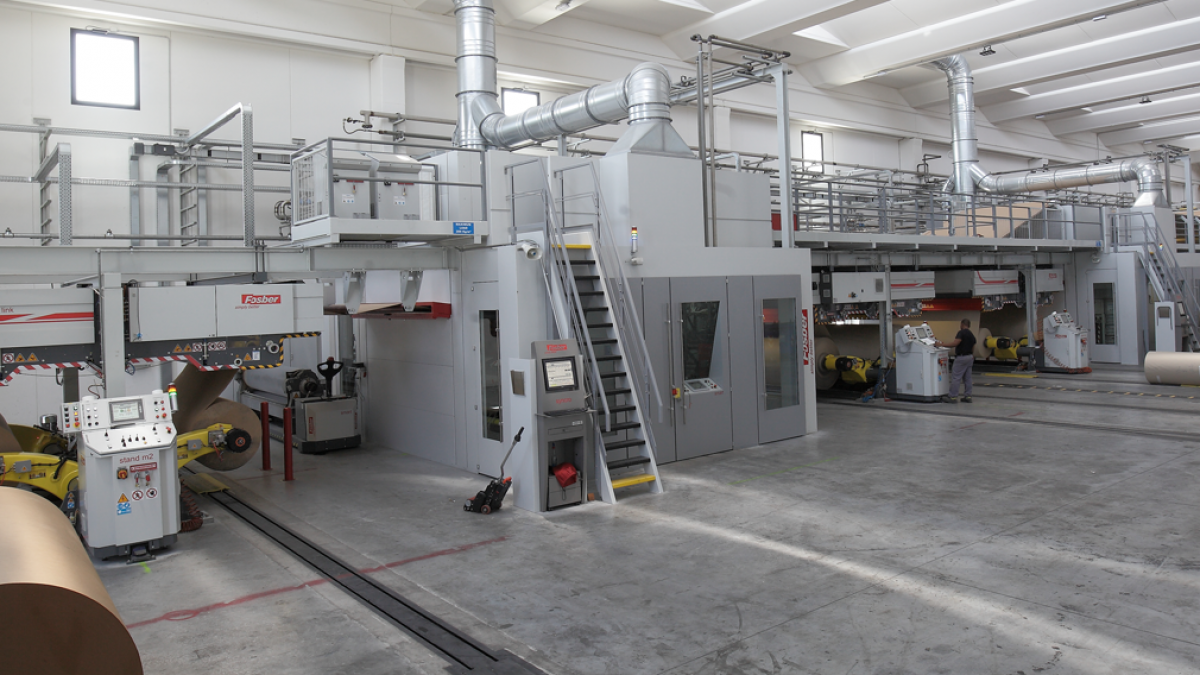 This is the story of three brothers, who saw a gap in the market and decided to start up a new business. It was in 1968 — the Trasarti brothers set up SIFA as a small converting company in the garage below their house in Francavilla d’Ete in eastern Italy, with one die-cutter and a beam slotter — one brother in administration, another in sales and the third in manufacturing. Almost 50 years on, the business now employs 120 people and generates €32 million in sales per year.

The oldest brother, Giuliano, was working in a local sheet plant, where cutting of the boxes was done by hand. When he asked why they did not have a die-cutter, the owner said they could not justify the expense. It was then that Giuliano approached his brothers, Vittorio and Luigi, with the idea of buying a second hand platen to do the die-cutting for his employer. The rest, as they say, is history; a history of taking opportunities when they arose and has resulted in a great deal of success.

By 1997, the company was now getting too big for the factory in Francavilla d’Ete, so they started to look for an additional site. An opportunity arose for them to move to a large factory in nearby Mogliano; a factory where a shoe company had been operating before moving. SIFA set about transforming the factory into a box plant. The 5,000sqm site was equipped with various pieces of new converting equipment and as production grew, so the owners decided the time was right to install a corrugator. By 2000, the Trasarti brothers took the bold decision to invest in a new 1.8m single knife corrugator — even though their annual production was only a little over 10 million sqm of board per year.

They had chosen a narrow machine because they needed to ensure they were making the flattest board possible. It was their belief that in keeping the width narrow, they could ensure the best quality for E flute board that was being used not only for the shoe boxes, but also for an area of the business that they ‘made their own’ throughout the country – pizza boxes.

Around the time of installing the corrugator, the company faced a massive change. In the early 2000s, lots of the Italian shoe makers in the region came under huge financial pressure and many moved manufacturing to Romania in order to survive. Having had strong relations with their packaging suppliers, some of the companies approached SIFA and asked if they would consider setting up a sheet plant in Romania to continue supplying shoe boxes. Never ones to turn away from a challenge, the Trasarti brothers quickly set-up a sheet plant to service the customers. It was a business they continued to run successfully until around 2012, when they decided to sell it to local management.

With the addition of the corrugator in 2000, the company pretty much doubled its turnover each year for the next few years. With the increase in sales came the need for more space and more equipment, so the company built additional factory space and employed more people. In 2011, they acquired a sheet plant from SCA and transitioned the work into the Mogliano facility and continued to grow the order book. Fast-forward to 2015 and the family sit down to look at how they can sustain the growth, particularly for the next generation of the family.

“We believed that the one area of our business that need to change was the corrugator,” explains Luigi Trasarti. “We looked at upgrading the machine and trying to convert it to 2.5m, but we then decided it would be good to talk to some of the machinery manufacturers about buying a new machine. Our initial thought was 2.5m, because we believed that would be the best size of machine to keep tight control on the production of microflute board. However, after many discussions, we decided that jumping to 2.8m might be better idea. Even though we did not have the volume of production that would be suited to such a big machine, we took the decision to go to 2.8m.”

Investing €10 million is no easy decision. The Trasarti brothers knew that to install a big corrugator, they had to build much more factory space. They put forward plans to build an additional paper reel store and a new bay specifically for a new corrugator and associated materials handling.

“We visited lots of installations from many different manufacturers,” continues Luigi Trasarti. “We had discussions with the four best known machine manufacturers, but in the end, we decided on Fosber. The easy part of the process was language and the fact they are only 400km away from us. But it was more than that — we very quickly built up a good relationship with them and genuinely believe that they feel part of our business, helping us make the decision that will allow our business to continue growing. That was the overwhelming reason for our choice.”

The 2.8m machine is a complete S-line 400 corrugator from Fosber. The line comprises automatic reel stands with Link splicers, Smart 400 beltless single facers, Double Crest glue units and standard Express 400 double backer with 18 hotplates. On the dry-end, the machine features the 300m per min gapless order change thanks to the Constant System rotary shear, oil free Twin 400 and Master 400 latest generation cut-off knife with splice ejection unit. Trim edge removal is supplied by New Aerodinamica (pictured below) and the stacker is the latest generation Terminal 400, which was specified for the handling of microflute sheets. The complete line is controlled by the automatic Syncro corrugator process control, with steam control provided by Baviera.

“Changing manufacturer and installing such a high-tech machine obviously has its challenges,” says Luca Vita, Production Manager. “We had to get the operators to change the mindset and believe in the new technology. It wasn’t just the operators of the corrugator that had to adapt – even the clamp truck drivers had to get used to moving reels around that were 1.0m wider that they were used to! It was a complete culture shock, but with the training and ongoing support of Fosber, we have really hit the ground running.”

Choosing the 2.8m machine, the company wanted to ensure it had a machine that was able to produce high quality microflute, efficiently at high speed. “We have been really impressed with how low the energy consumption is on this new line,” continues Mr Vita. “Not only is energy usage low, but also starch and steam consumption is very low. We are also seeing the advantages of using a pressure roll system, which saves time and money as there is no belt to replace on a periodic basis. In my opinion, this has been an excellent move for the business.”

So as the business looks to grow its production to 100 million sqm over the next year or so, there is plenty for the Trasarti family to be excited about. “With growth in production capability comes more opportunities,” concludes Luigi Trasarti. “We will continue to invest in our converting department to allow us to grow into new markets — we are looking at HD print next, to help supplement our litho-laminated capabilities. As family, we know we have to continue to invest to secure our future — and this is something we are committed to doing, especially with machinery suppliers like Fosber, who like to feel like an extension of our business.”