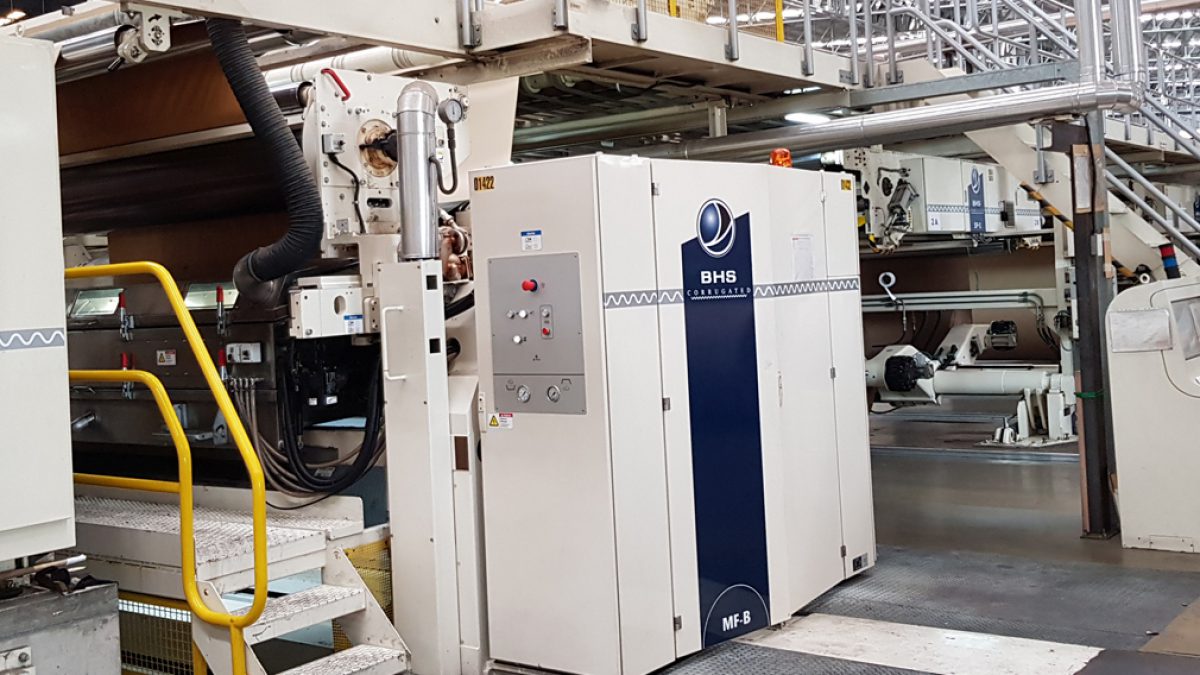 BHS Corrugated comes to the rescue!

Faced with a seemingly inevitable lengthy loss of output after damage from the fire halted production at the company’s largest factory, Hiang Seng decided to award BHS Corrugated a contract for a 2.8m corrugating line after the German supplier submitted a proposal to supply and install the new line in the shortest time possible. To accommodate Hiang Seng’s urgent request, BHS Corrugated reorganised its production schedule and delivered the new 2.8m line in time to begin commissioning at the end of 2016, just seven months after the Ekachai 2 plant was engulfed by fire.

After using the first 12 months to ramp up production as the Ekachai 2 operations team became familiar with their new corrugating line and state of the art factory automation system, Hiang Seng has enjoyed the full benefits of owning Thailand’s first 2.8m BHS Corrugated line for the whole of 2018.

“We had a serious fire and our original 2.5m corrugator suffered a lot of fire damage. It was going to be very difficult to repair, so we decided to find a new machine for our Ekachai 2 plant,” explained Pongsiri Tejavibulya, Director of Hiang Seng Fibre Containers Co Ltd. “BHS Corrugated offered the fastest delivery and installation. We asked other companies for proposals, but none were as accommodating as the German manufacturer. This is our first BHS Corrugated line.”

He continued, “The fire occurred in our Ekachai 2 plant at the start of April 2016 and we started production on our new line in November, so we had seven months not only to install the new machine but also to build a new factory to replace the old building, which was totally destroyed in the fire. “We have installed our BHS Corrugated line on the same spot as the old corrugator line. In fact, the new line is longer than our previous corrugator, so we had to buy more land next door and to carry out piling to extend the factory floor area.”

Bangkok-headquartered Hiang Seng is one of Thailand’s largest corrugated packaging and paper companies – owning five corrugated factories (that are equipped with six corrugating lines) and a paper mill.

The Ekachai 2 plant is one of two neighbouring factories belonging to Hiang Seng in Ekachai-Bangbon in Samut Sakorn, south of Bangkok, near to the company’s paper mill.

Hiang Seng also owns two neighbouring corrugated factories in Samrong, Samut Prakarn, in Bangkok’s eastern outskirts, while the fifth and newest corrugating plant that opened in 2008 is located in Wangnoi in Ayutthaya, about two hours drive north of Bangkok.

The devastating Ekathai 2 plant fire coincided with a full order book that the company was keen not to lose. “One of our six corrugators was down and we needed a new line as quickly as possible,” Pongsiri said. “Fortunately we had some spare capacity at our other plants, but it was a difficult time as customers kept ringing us to see if we could supply them or not. Luckily we didn’t lose a single customer, but our other factories all had to work hard to fill the missing corrugated sheet and box production.”

Hiang Seng’s decision to install the 2.8m corrugator has increased the plants monthly production capacity to 9,000 metric tons, depending on the season, compared with 6,000 mt before the fire.

“A lot of our corrugated sheets are for small converters who are located in areas where the fruit picking season creates box demand for export, especially for durian and longan fruit crops,” Pongsiri said. Fruit boxes produced at the Ekachai 2 plant are sent to fruit farms across Thailand, some up to 700km away in northern Thailand.

In addition, the plant supplies corrugated sheets to converters who are located mostly within a 100km radius of Bangkok and who also supply fruit farms across the country.

“BHS Corrugated sent a lot of engineers and trainers here to look after the machine and to train our staff,” Pongsiri noted. “Their customer service is good here through the Thailand office in Bangkok.”

In addition to installing the corrugating line, Hiang Seng has improved on its original Ekachai 2 plant production layout by incorporating a Dücker automatic conveyor system to increase operating efficiency and reduce waste. “There is more efficiency on the corrugator too; paper waste is down from 12+% to 8%,” Pongsiri said. “The new corrugator is fully automatic, so sheet quality is constant and sheet defects are less.”

Meanwhile, in addition to installing the new corrugating line, Hiang Seng has upgraded printing facilities at the Ekachai 2 facility with the arrival of the factory’s first four-colour printer. Although the factory fire destroyed the original corrugating line and about half the buildings, the blaze was brought under control before reaching the plant’s five flexo printing lines – an assortment of models from Mitsubishi, Dong Fang and Bobst. All five printers are now installed in the rebuilt Ekachai 2 plant along with Hiang Seng’s new flexo printer.

“We installed a four-colour Bobst 924 in 2017, the rest of our printers are three-colour models,” Pongsiri explained. “We chose the Bobst 924 as there is increased demand for high quality printing, especially for food products for which customers want good quality designs. Customers use a lot of pictures on their box designs. Some customers’ sales are slow in Thailand, so they want to increase sales. They think better box designs can increase their sales. When one company starts this, the others follow.”

Hiang Seng produces an average of 20,000 mt of corrugated products monthly at its five Thai corrugating and converting plants. “We produced 250,000 mt in 2017. Business is stable and in 2018 we achieved the same production number, particularly thanks to the solid start-up of the new BHS Corrugated line,” Pongsiri said.

“The economy in Thailand is not growing really and population growth has slowed down. Also there are political problems and the private sector is investing less. Some foreign investment has moved away – electronics and footwear have moved to Vietnam and clothing to Cambodia. But Thailand remains strong in automotive, petroleum, semiconductors, rubber and agriculture and thanks to the solid output from our Ekachai 2 plant, we are expecting another good year in 2019.”