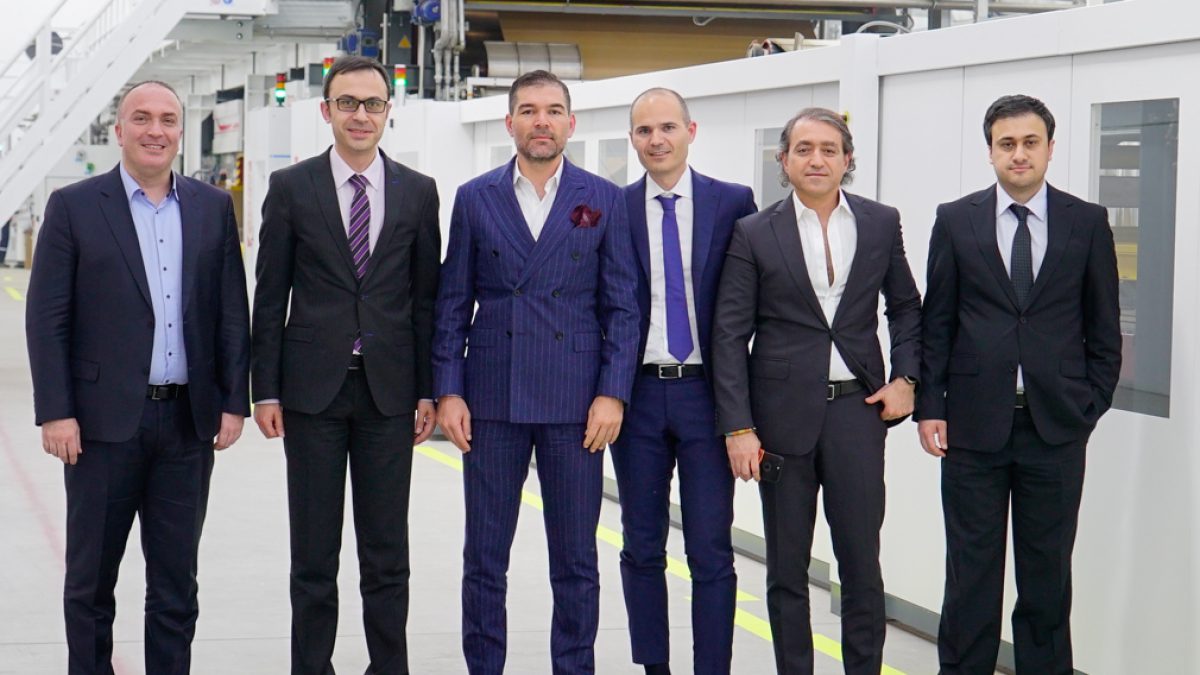 The Turkish market currently has an annual production rate of about 2.3 million tons of corrugated board. Around 50 per cent of the market is held by multinational companies. The top five companies – which includes the independent company, Ankutsan – account for some 65 per cent of the market. The rest of the market is shared between about 90 companies. It is believed that there are around 100 corrugators installed in Turkey and industry estimates suggest there are around 200 sheet plants in operation. In talking to some of the leading figures in the Turkish industry, it is clear that a new trend is occurring, as companies look to invest in new, high speed corrugators. These new machines will be targeted at sheet feeding, specifically for the high volume, well invested sheet plants in the region. Some say that there are simply too many narrow and low-speed corrugators in operation today and that over the next few years, many of them will be shut down due to inefficiencies and the competition created by the new machines coming on stream.

A relatively new player in the rapidly developing Turkish market is Ankutsan. The company was founded by Rustem Kesgi and Mustafa Cakal in 2002 in Antalya. Some 15 years on, today the company has three plants operating under the name of Ankutsan; in addition to this, they also have a sister company in Istanbul, Kutay Ambalaj. Ankutsan is the second largest independent group in Turkey today, with an annual capacity of 425 million sqm across the three plants. The group has almost 500 employers and in 2017, turnover is expected to reach €80 million.

The company’s plant in Ankara is the first real sheet-feeder in the Turkish market. The site is 37,000 sqm with a 14,000 sqm building. The plant was started-up at the end of 2016, a mere nine months after construction began. Geographically, the plant is located in the center of Turkey and supplies sheet board to plants within a 300-350km radius. There are 50 people – including office staff – at the Ankara plant. The site runs on a two shift operation, making it one of the most efficient corrugated board plants in Turkey. The plant is equipped with a 2.8m complete Fosber line, capable of running at 350m per min. The materials handling system in the plant has been designed and installed by Minda, with end of line pallet strappers from Mosca. The starch kitchen is from SRP Europe, including the first single-big silo raw material storage system installed in Turkey.

The total capacity of the plant is 200 million sqm per year. Around 60 per cent of this is for the production of double wall board in various combinations – single wall is available in B, C and E flute. In terms of papers being used, the majority of fluting and testliner is supplied by domestic paper mills, while kraftliner and coated papers are imported from USA, Northern and Central Europe. Typically, the paper weights used range from 75gsm for fluting, up to 260gsm for the kraftliner.

The company’s Mersin Plant has an annual capacity of 140 million sqm – the plant is dedicated to the production of packaging for export. For example, Ankutsan exports huge amounts of pizza boxes, sending boxes to the USA, North Europe and the Midde East. The plant can produce six colour, high quality graphics packaging, thanks to having two flexo folder gluers and four rotary die-cutters. Corrugated board is produced on a 2.5m corrugator from Asia, which has been upgraded with Fosber equipment. The machine runs at 250m per min.

Agricultural boxes are the prime market for the Antalya plant. It has a capacity of 85 million sqm per year and runs a six colour rotary die-cutter, as well as a flexo folder gluer, flatbed die-cutter and a printer slotter. A 1.8m Asian corrugator has also been upgraded with Fosber equipment, to achieve 250m per min. Both Antalya and Mersin produce packaging solutions for the food and beverage markets, industrial, agriculture and flowers, primarily for domestic customers.

Ankutsan was planning to invest in another integrated plant with corrugator and converting machines in 2015. However, after market analysis, they realised that there was not much dedicated sheet-feeder capacity, so they decided to create the country’s first high volume sheet-feeder. Thanks to the market acceptance and growth of the Ankara operation, the owners have put in place a new plan to create another sheet-feeder in 2019, in the Marmara region. This territory alone accounts for about half of total Turkish corrugated board consumption. This new investment project will commence after they have finished the new plant in Kutay next year; the site is in the west of Istanbul, close to the borders with Greece and Bulgaria. The company says that once the new sites are finished, the next – and biggest step – of Ankutsan’s development will be to invest in a paper mill. The aim here is to create a healthy supply for its own internal paper consumption. The target capacity will be over 200,000 tons per annum on a single paper machine.

Ankutsan first started working with Fosber back in 2013. The first dealings were at the Antalya plant, when Fosber supplied new dry-end components for the existing 1.8m corrugator. Once installed, Antalya become one of the first plants in Turkey to use gapless order change. “The results were very impressive,” explains Edoardo Silvestri, Sales Director, Fosber. “The average speed of the corrugator increased around 30 per cent and down time and waste were significantly reduced. The documentation and diagrams of the existing corrugator from Asia were not overly detailed, so co-operation between Ankutsan and our technical departments were important if we were to achieve good results.”

Following the success of the Antalya project, Ankutsan then asked Fosber to implement the same type of gapless order change and dry-end configuration on the 2.5m machine at Mersin. The first step was to replace the existing rotary shear and slitter scorer with Fosber equipment, but the manufacturer of the corrugator line was different from the Antalya plant, so there were different technical issues to deal with. The installation and start-up was again managed with Ankutsan and Fosber technical departments, without any direct support from the OEM.

“Today, the Mersin plant is one of the most productive plants in Turkey, especially in terms of average speed of the corrugator,” says Ilker Arguc, Fosber Turkey. In 2016 there were other Fosber wet-end and dry-end upgrades at both the Antalya and Mersin plants – this was the same period during which Fosber started up the complete line at Ankara. “The work that our entire team have put into the relationship with Ankutsan is proof of a successful working partnership,” continues Silvestri. “Ankutsan could see we had great experience in supplying dedicated lines for sheet feeding and we had the opportunity to show them such examples in Germany, Italy and Poland. Many positive comments from existing customers helped Ankutsan make their final decision to choose our corrugator.”

“We are proud to have worked so closely with Mr Kesgi and Mr Cakal, who have placed their trust in our company and our products,” concludes Arguc.